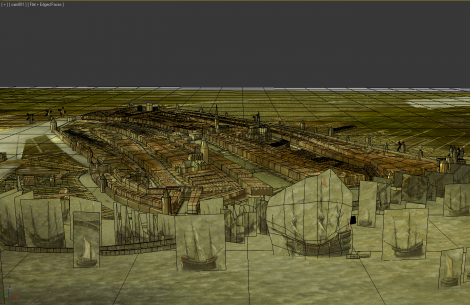 Presenting Amsterdam’s multifaceted history in seven chapters in a clear and historically correct way, yet intriguing and visually appealing at the same time. That was the main challenge of the Amsterdam DNA project, commissioned by the Amsterdam Museum. And PlusOne  proved itself to be the right party for the job.

The aim of Amsterdam DNA exhibition was to take visitors on a 45-minute historical tour trough Amsterdam. Because of this short time span, the decision was made to tell the majority of the story by films, which were projected onto big glass screens in the middle of the gallery, instead of putting numerous objects on display.

Since the story was divided into seven chapters, PlusOne was asked to create seven films, in ten languages, accompanied with a start screen for each film that loops until a visitor activates the content with a QR-code. This code is printed on a booklet the visitors receive at the entrance.

Next to the seven films, PlusOne was asked to develop a video-wall of approximately seven by three meters. And once the project was finished, also to create a trailer, which featured the highlights of the films.

To achieve the goals set in the briefing, PlusOne chose to add an extra dimension by making the images three-dimensional. Another dimension, sound, was added to make the whole even more appealing. Lifelike sounds and soundtracks that fit the spirit of the age add luster to the scenes.

In the films, a small collection of objects is showcased: in each chapter a specific exhibit forms the basis for the story of that particular period. For instance the first chapter concerns the 11th until the 16th century: the reference historical object is the globe of Blaeu. Because of the value and the fragility of the object, PlusOne had to recreate it in CG (Computer Graphics) after taking pictures of it from all angles. By this way, PlusOne could animate the globe and all the details it is enriched with, such as the ships:

During the process there were some hurdles to take. For the first film, for instance, which tells about Amsterdam being founded and build on wooden poles, almost nothing was conserved. This basically meant the film had to be created from scratch, that is what PlusOne does on a daily basis; but this case required a different approach. Since an important part of the history was recreated, it of course had to be historically correct, therefore a lot of research was necessary. Norbert van Middelkoop, one of the museum’s curators, provided PlusOne with a lot of input and together they constructed the animation.

Another key element was the challenge to bring the masterpieces to life without affecting their identity, or rather, their soul. That’s a thin line to walk, but something the whole team kept in mind during the entire process.

About the integration of animate/interactive digital content in traditional museums, PlusOne Creative Director Martijn Hogenkamp observes: “The technical abilities these days are great tools to portray the collections of museums in an appealing manner, without losing the identity of the pieces of art. This enables museums to reach a broader (and younger) audience. So we believe digital technologies and tradition complement each other”.

PlusOne is an Amsterdam-based design and animation studio, with a strong focus on aesthetics and creative storytelling. In the field of digital cultural heritage preservation PlusOne made great works such as Beelden voor de Toekomst (Images for the Future) – a project about the preservation and digitization of the Dutch audiovisual heritage – and De Gouden Eeuw – a documentary series for Dutch public service broadcasters NTR and VPRO about The Golden Age in The Netherlands. Amsterdam DNA, directed by Martijn Hogenkamp and produced by Marcel Vrieswijk, was awarded a silver W3Award by the International Academy of the Visual Arts (in the same year PlusOne received the gold statuette for another piece called Naturalis, a film about the past, present and future of Naturalis Biodiversity Center, the Dutch center of excellence for biodiversity studies).

3DsMax, Cinema4D and the Adobe package.

Thanks to: Harold van Velsen