To launch the campaign, Europeana is inviting users to create digital records of handwritten personal letters of WWI in the first Love Transcribathon of Europeana 1914-1918

With the end of the art-based Europeana 280 campaign, Europeana is opening a new chapter with the launch of #AllezLiterature. Organised around three main phases, this new thematic campaign will focus on libraries and archives and run on social media in the first half of 2017. And while it continues to explore our shared human experience through culture it focuses on a new medium: words, in all their forms and languages.

Through #AllezLiterature Europeana wants to shine a light on the value of the written word in our shared cultural heritage, as enriched by text, literature and poetry as it is by paintings, drawings or sculptures.

To launch #AllezLiterature, Europeana is inviting users to create digital records of handwritten letters from The First World War by taking part in the Love Transcribathon. This special edition of the crowdsourcing challenge Transcribe Europeana 1914-1918 features a selection of intimate testimonies through more than 40 letters, postcards, diaries, and other personal documents in several languages. 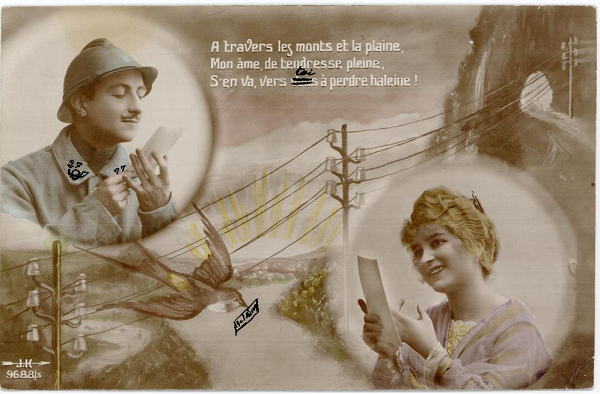 While this first phase of #AllezLiterature focuses on user-generated content, phases two and three will build on the success of working with institutions on the #Europeana280 campaign and reach out to libraries and archives. Together we want to celebrate Europe’s Poetry and textual treasures, starting respectively on World Poetry Day (21 March 2017) and World Book Day (23 April 2017). To do so, we will invite libraries and archives to support #AllezLiterature on social media by initiating conversations and activities that engage with users to highlight their text-based content.