The trading castles and fortresses along the West African coast bear testimony to one of the saddest chapters of human history, the Atlantic Slave Trade. International awareness of these sites is limited and their digital documentation can contribute to the creation of such awareness and a broader understanding, as well as provide a record for the future and data for restoration, conservation, site management and research.
The documentation of one of these castles, St. George’s in Elmina, Ghana, in 2006, was one of the first initiatives of the Zamani project. At this early stage the project, based at the University of Cape Town, was known as the “African Cultural Heritage Sites and Landscapes Database”, funded by the Andrew W. Mellon Foundation. 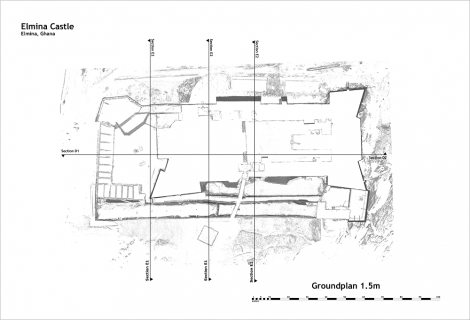 The experience of scanning the dungeons and prison cells of the Elmina castle provoked a lasting impression on the Zamani team and a cognizance of at least some of the realities of the slave trade. This drove Prof. Rüther, the Zamani research group leader, to initiate a project thanks to which most of the architectural sites of the slave trade would be documented and relevant information gathered. It was then that the decision was made to create a Slave Trade Database, collecting and presenting 3D digital models of monuments and sites related to the slave trade together with other spatial and contextual information. The project – the Zamani project indeed – has been ongoing since 2006 and to date four Castles and Forts have been documented in addition to Elmina. These are Fort Jago, also in Elmina, Fort St Anthony in Axim, Fort St Sebastian in Shama and the Cape Coast Castle, all on the Ghanaian coast, once known as the Gold Coast.
Ghana’s forts and castles are collectively part of the UNESCO World Heritage (UWH) list as “Forts and Castles, Volta, Greater Accra, Central and Western Regions”. The UWH list quotes three Castles (Cape Coast, St. George’s d’Elmina and Christiansborg at Osu, Accra) and 15 Forts (http://whc.unesco.org/en/list/34). It is the ambition of the Zamani project to document the majority of these as well as other relevant monuments of the Slave Trade in Africa and elsewhere. 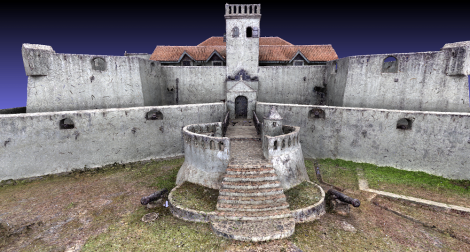 Unfortunately, the Slave Trade database initiative can be addressed only in small steps as, since the end of the Mellon grant period, there has been no continuous funding for the project. Every single field campaign relies on the generosity of individual donors or on the request for spatial data for funded conservation/research projects from historians, archaeologists or heritage practitioners and institutions. For this reason the group’s aspiration to create a comprehensive Slave Trade Database has been a long and often frustrating struggle.

At present, Zamani is in quest of funding for further field campaigns in sites of the African West coast, elsewhere in Africa and possibly in the Americas. Zamani’s Slave Trade database project enjoys the approval and cooperation of the “Ghanaian Monuments and Museums Board”.

Technical notes: when documenting Elmina in 2006, the group still worked with a Leica Time-of-Flight scanner, then cutting-edge technology. Full high-resolution scans took hours and a working day with six to eight completed scans was considered a productive one. The more recent field campaigns have been executed with state-of-the-art equipment kindly provided by Z&F and on a good day between 50 and 100 scans can be completed, depending on accessibility and the various resolutions required for different parts of the monuments.
In the early days of scanning neither equipment nor software were ideally suited for texturing and creating photo-realistic models was extremely time consuming. This has improved dramatically and the team now creates, where possible, fully textured models. Zamani’s philosophy is to create holistic documentations which are as objective and spatially accurate as possible. Each dataset therefore comprises not only of cm accurate geo-referenced 3D models, but also of annotated elevations, sections and ground plans of the scanned buildings, large numbers of individual panoramas, panorama tours as well as a GIS of each monument and, in some cases, its immediate environment. All spatial data is geo-referenced to WGS84.
The Zamani project has been able to continue with its work beyond the original funding phase because of the generosity of a UCT Alumni and philanthropist, Duncan Saville, and of Martin Botha, via the Zamani Trust. The project has also the much appreciated support of Christoph Fröhlich, from the laser scanner manufacturer Z&F.
Parallel to the slave trade initiative, Zamani is developing a “Swahili Coast Database” together with archaeologists Stephanie Wynne-Jones (York University), Jeff Fleisher (Rice University) and Thomas John Biginagwa (University of Dar es Salaam).

Zamani project, entirely not-for-profit, relies solely on external financial support and would therefore greatly welcome funding or alternative support. International interns and research students regularly spend time with the research group in the Geomatics Division at the University and those interested to assist as volunteers can contact the Principal Investigator (Heinz.ruther@zamaniproject.org).

The Zamani website renewed itself! Come and see it at www.zamaniproject.org!