A Roman fresco discovered under a XIX century painting

The terahertz technology, also used in airport security scanners, has detected the face of an ancient Roman man hidden below the surface of a wall painting in the Louvre Museum in Paris. The nineteenth-century fresco under examination was Trois homes armés de lances, in the Giampietro Campana collection (an Italian art collector in the 1800s who sometimes restored damaged parts in the artworks, or reworked the original), and the analysis with terahertz technology unveiled an authentic Roman fresco that lies under it, which scientists and art historians believe may be thousands of years old. Art historians believe that Trois homes armés de lances was painted after the ancient fresco was removed from its original wall in Italy and entered Campana’s collection. 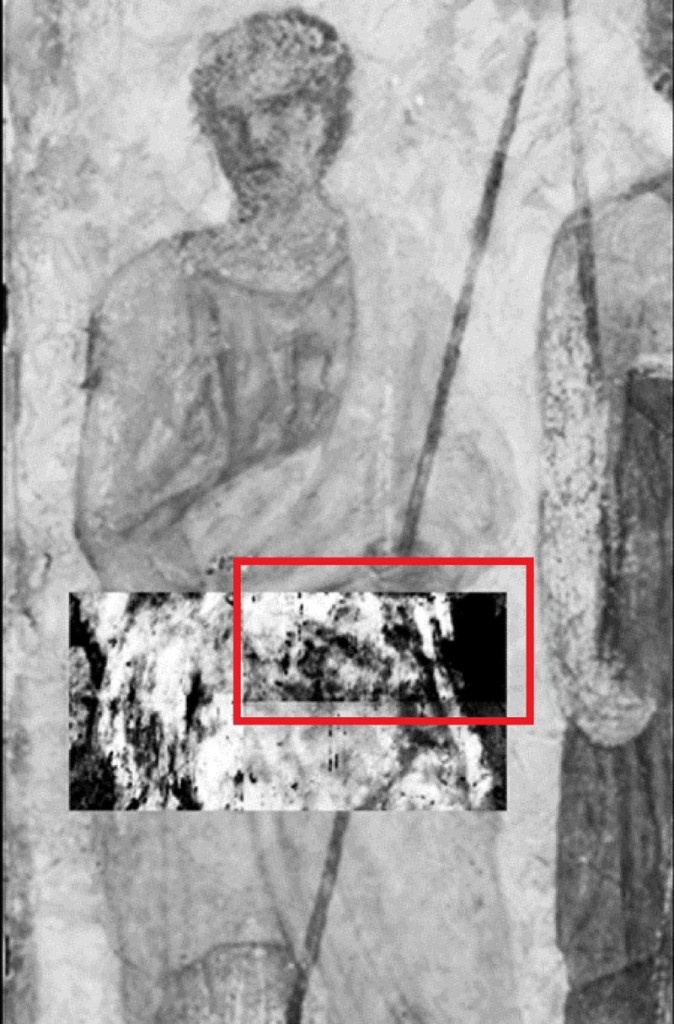 It is a well-known habit that in the past artists sometimes re-used canvases or covered old paintings with new works, in order to avoid the expense of buying a new canvas or to enhance colors and shapes in a prior composition. J. Bianca Jackson, Ph.D. now at the University of Rochester, who reported on the project, explained how the staff tried with terahertz technology analysis when suspicions that a hidden image might lie beneath Campana’s brushstrokes came out.

“We were amazed, and we were delighted,” said Jackson. “We could not believe our eyes as the image materialized on the screen. Underneath the top painting of the folds of a man’s tunic, we saw an eye, a nose and then a mouth appear. We were seeing what likely was part of an ancient Roman fresco, thousands of years old.”

“Terahertz technology has been in use for some time, especially in quality control in the pharmaceutical industry to assure the integrity of pills and capsules, in biomedical imaging and even in homeland security with those whole-body scanners that see beneath clothing at airport security check points,” said Jackson, “But its use in examining artifacts and artworks is relatively new.”

This research was funded by the EC project CHARISMA and in part by AHRC/EPSRC Science and Heritage Programme; while the research on the possibilities offerd by the use of terahertz technology for heritage investigation is on-going, as witnessed by the recently launched project INSIDDE.

“No previous imaging technique, including almost half a dozen commonly used to detect hidden images below paintings, forged signatures of artists and other information not visible on the surface has revealed a lost image in this fresco,” Jackson said. “This opens to door to wider use of the technology in the world of art, and we also used the method to study a Russian religious icon and the walls of a mud hut in one of humanity’s first settlements in what was ancient Turkey.”