Digital Revolution is a series of art-projects and events lasting up until 14th September at the Barbican in London. The projects range from interactive installations, new commissions from artists, film-makers, digital experts, musicians and game-developers who are all pushing the boundaries and exploring new opportunities for innovation through digital media.

There is also a collaboration with DevArt, the Google project which aims to provide opportunities for digital innovation in the arts (‘digital art with code’). Works featured also include concepts and pieces from Christopher Nolan’s award-winning film, ‘Inception’ and the ideas and work behind the visual effects produced in the Oscar-winning film ‘Gravity’, directed by Alfonso Cuarón. 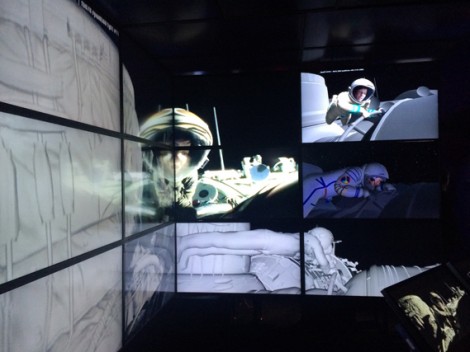 Digital Revolution takes us through a journey of digital media through time, from 1970s pieces, old televisions to Mathematician John Conway’s ‘Game of Life’, which uses simple algorithms to create moving pixels.
The journey not only shows the early stages of digital art but also shows us how far we have come in terms of digital artistic production. The series of exhibitions also demonstrate to us how new media and digital technology have influenced and developed a wide range of art forms, including cinema.

(Photos: Assemblance by ©Umbrellium 2014 and other photos from creativereview.co.uk).