A Novel Technological Solution for the Development of Online Virtual Museums 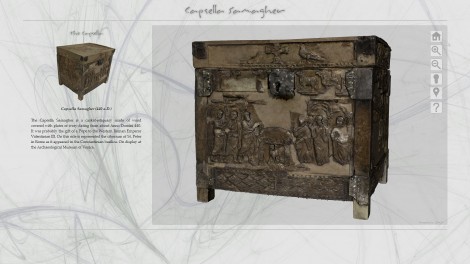 3DHOP (3D Heritage Online Presenter) allows anyone with basic webpage-creation skills to setup an HTML page displaying a scene composed by high-resolution 3D models. This innovative free tool, now in its second release, is essentially a viewer that can stream and render effectively 3D data over the net, letting the user interact with high-resolution 3D content. It is oriented towards the Cultural Heritage (CH) field, where the need to handle highly detailed digital representations of cultural artefacts is often mandatory; however, it may also be useful in other contexts requiring high performance and interactive visualization of high-resolution 3D content.

3DHOP has been developed by the Visual Computing Lab, ISTI-CNR, in the framework of several EU projects addressing the management of large collections of 3D digital models. It is the result of 10 years of R&D focused on the design and implementation of easy-to-use tools that enable CH professionals to present, visualize and enrich high-quality digital 3D models (the first important result of which was the Inspector system [1]).

The rationale underlying 3DHOP was the lack of tools to manage the interactive visualization on the Web of high-resolution 3D geometries in a simple way. While there are various products (both free and commercial) that can re-create complex virtual scenes made of simple 3D entities, they are not suitable for the management of complex 3D geometry, and are mainly aimed at expert Computer Graphics (CG) developers.

3DHOP instead allows creating in a few steps a virtual scene focused by default on the selected 3D model. Thanks to the intuitive trackball system it provides the basic interactions with the selected model (rotations, translations and zoom), and some other interesting feature, like lighting control and scene animations. Moreover, with its new version, which will be released in these days, 3DHOP will introduce the possibility to manage the visibility of more models at the same time, to place interactive dynamic hot spot on the virtual scene, to configure useful event listener, and so much more.

3DHOP can be used by anyone with simple webpage-creation skills, without the need for specific CG expertise; the goal was to be easy-to-use and easy-to-learn. For this reason, 3DHOP uses general web programming mechanisms (declarative programming). The various components of the visualization page (the 3D models, the Trackball, the Canvas, the Scene) are treated like HTML entities in the same way as the rest of the structural elements of the web page, and are declared and customized using simple parameters. A developer can just pick a starting example (as one among the many provided on the official 3DHOP web site: http://vcg.isti.cnr.it/3dhop), and modify it by simply changing some parameters of the entities. 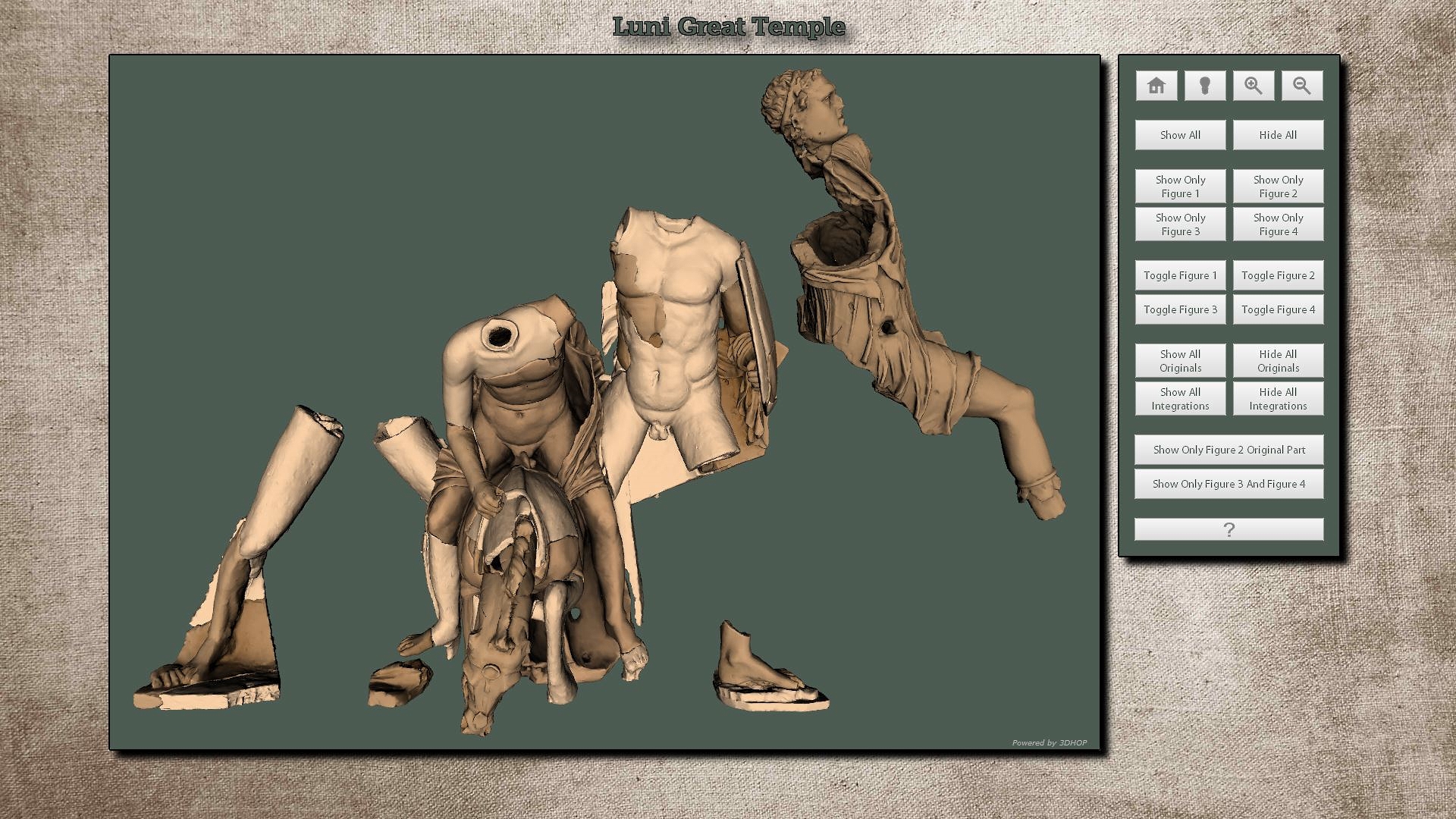 3DHOP has been created using standard Web technologies (like JavaScript and HTML5), without relying on external components; it can run on all the most widely used browsers (Google Chrome, Mozilla Firefox, Internet Explorer and Opera) and all the principal OS (Win, Mac-OS and Linux) without the need for plugins. It must be stressed that although 3DHOP has been designed for the Web, it only needs a Web browser to work; this means that it can also run locally,  to implement museum kiosks, for example. Unlike similar tools, the 3DHOP viewer is totally client side, and does not require a specialized server. 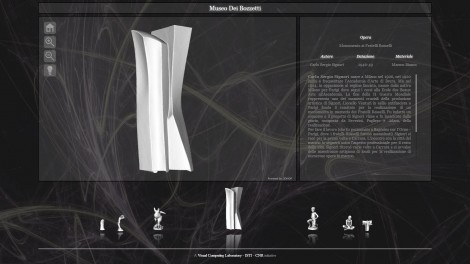 3DHOP currently supports two types of 3D models: single-resolution (PLY and soon OBJ) and multi-resolution (NEXUS). In particular, the multiresolution Nexus technology (another achievement of ISTI-CNR),  supports the streaming of high-resolution 3D meshes over the HTTP protocol, enabling the exploration of very large models (millions of triangles) on commodity computers with standard internet connections. 3DHOP is based on WebGL (the standard API for the CG on the Web developed as the JavaScript equivalent to OpenGL|ES 2.0), and on SpiderGL, a JavaScript utility support library for WebGL (again developed by the Visual Computing Lab [2]), which provides an API with the typical structures and algorithms for real-time rendering in the development of 3D web applications.

The evolution of 3DHOP will be focused on the integration of visualization components for other multimedia layers, like images, audio, video, etc. Work is already underway for the management of large 3D terrains and RTI (Reflectance Transformation Imaging) images [3].

With 3DHOP, we hope to offer a novel and versatile solution for publishing 3D content on the Web, facilitating deployment and access to high-resolution 3D resources by non-experts in 3D programming. This new technology, particularly suitable for Online Virtual Museums, should encourage the global dissemination and deployment of high-quality 3D cultural heritage content via the Internet.