2016 Ars Electronica Festival: RADICAL ATOMS and the alchemists of our time

While cultural and social turbulence in the wake of the Digital Revolution still confronts us with substantial challenges, a new generation of creative scientists and engineers has long since gone a step further. They have joined forces with artists and designers and are amalgamating the virtual world of data with the physical world of our bodies. They’re using bits and atoms to fabricate substances and materials with completely new characteristics. Due to these creators’ unorthodox methods and, in many instances, fantastic visions, they’re arousing an uproar that’s comparable to the response that greeted the alchemists of bygone days and their mysterious experiments.

The 2016 Ars Electronica Festival will spotlight this phenomenon and do so together with some world-renowned associates. Serving as scientific advisor to this year’s theme symposium is Hiroshi Ishii of MIT Media Lab in Boston, and the theme exhibition is being curated jointly by MIT and the Ars Electronica Futurelab.

The 2016 Festival Campus will feature Peking’s Tsinghua University, considered one of China’s best institutes of technology and the natural sciences, and a member of the C9 League, an association of the country’s nine most prestigious universities. 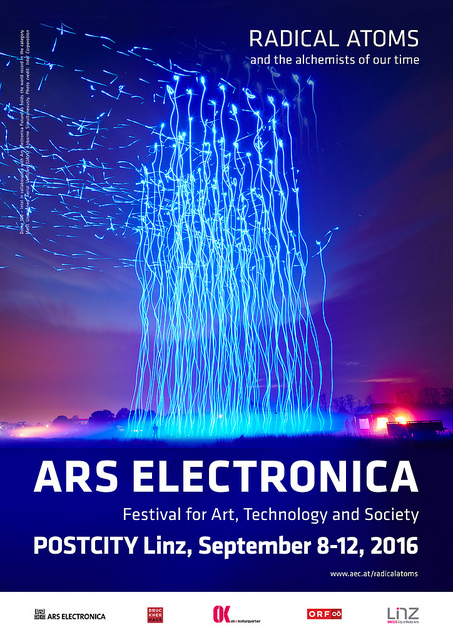 The sujet of the 2016 Ars Electronica Festival shows the project “Drone 100” – Intel in collaboration with Ars Electronica Futurelab holds the world record in the category Most Unmanned Aerial Vehicles (UAVs) Airborne Simultaneously. More impressions of Drone 100 can be found on www.aec.at/feature/en/drone100 / Photo Credit: Intel

Hiroshi Ishii is a professor at MIT Media Lab, where his 1995 launch of the Tangible Media Group garnered worldwide attention. With a whole series of spectacular prototypes, he has completely redefined the human-machine interface. Now, following the passage of two decades, Hiroshi Ishii is kicking off another revolutionary research program: Radical Atoms.

This time, his mission is nothing less than the annulment of the fundamental limitations that physical atoms—in contradistinction to virtual bits—are subject to. What he aims to create are physical objects that, thanks to their radical atoms, can modify their surface and form just as quickly and organically as digital models.

… and the Alchemists of Our Time …

This year’s Ars Electronica Festival is also focusing on the human beings behind these technological concepts and visions. Who are these people at work crafting our future? What drives them on? With whom are they collaborating, and what characterizes the workplaces at which they develop their ideas and advance their projects? Some of their aims and experiments might be as utopian as those of their historical predecessors who went off in search of immortality-inducing elixirs, universal panaceas and means of turning base metal into gold. Nevertheless, doesn’t this also apply to the significance and relevance of the chance discoveries they did indeed make thereby, or even their so-called waste products?

After all, Hennig Brand was looking for something else when he discovered white phosphorous in 1669, as was Johann Friedrich Böttger when he came up with porcelain in 1707 — which, in contrast to China, had been unknown in Europe until then. Moreover, there were all the unconventional new methods of the alchemists, their theories, and the modes of collaboration among them that helped pave the way for modern (natural) sciences. And we’re experiencing a very similar development today. A profound process of transformation that has pervaded the entire research and development field is dispelling traditional ways of working and methodologies, giving rise to new locations and framework conditions, and bringing forth unusual alliances and forms of collaboration. The interaction among art, science and technology that’s still in its infancy is a seamless fit in this configuration too and is changing the way we look at their objects of joint investigation. Among the results are new views of the social role of science—with respect to genetic engineering and biotechnology, for instance—or the relationship between nature and technology—consider, for example, natural resources and climate change.

… at the focal point of the 2016 Ars Electronica Festival

“RADICAL ATOMS – and the alchemists of our time” is the theme of the next Ars Electronica Festival September 8-12, 2016. Hundreds of artists, scientists and engineers from all over the world will be convening for speeches, panel discussions, projects and prototypes, workshops, performances, interventions and concerts staged over five days at multiple locations in downtown Linz.

The organizer is Ars Electronica, a wholly-owned subsidiary of the City of Linz, Austria; co-organizers are the ORF–Austrian Broadcasting Company’s Upper Austria Regional Studio, the Brucknerhaus concert venue and the OK Center for Contemporary Art.